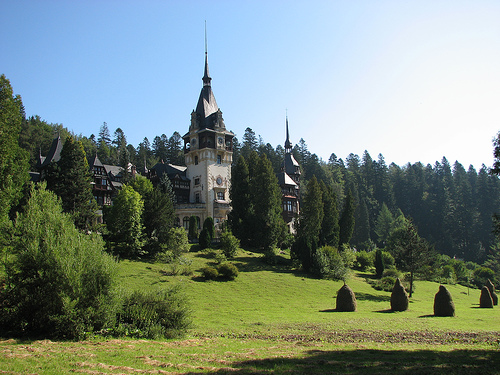 Today we find ourselves in Romania. I will admit, I’ve always wanted to visit this country although I have been put off by some of the documentaries I’ve seen and stories I’ve read. But let’s leave that aside and see what there is to do in this country when visiting as a tourist.

First, some facts: located north of Bulgaria, south of Ukraine and Moldova, it’s eastern border is the Black Sea and Hungary and Serbia are nestled on its western edge. It is the largest country in southeastern Europe and the twelfth biggest in Europe. Almost half the land is covered by semi-natural ecosystems and Romania has one of the largest areas of undisturbed forest in Europe. And in the spirit of symmetrical aesthetics, the terrain is equally divided amongst hills, mountains and plains.

As with all the countries in this area, it’s been overrun by most every dominate kingdom of the era, so there are Saxon, Roman, Ottoman, etc. influences. But for most people, mention Romania and they immediately think of Transylvania and Dracula. Bran Castle is, obviously, a must-see tourist attraction. Evidently, the original castle was destroyed in a battle but subsequently rebuilt during the 14th-century “everyone needs a castle” craze. In addition to Bran Castle, there’s also Corvin Castle which you can wander around freely and let your imagination loose.

Peles Castle is a neo-Renaissance masterpiece started in 1875. Guided tours are compulsory and you have to pay extra to take photographs but evidently there’s lots to see. If you’re done with castles, there are plenty of museums. However, for me, I’d head to Maramureş, Romania’s most traditional area and stroll among the cobbled streets, gawk at the gothic wooden steeples on the churches (eight of which have UNESCO world heritage designations) and basically see what Romania was like one hundred years ago.

Of course if I had a supercar, I’d do like Top Gear and drive it under the People’s House also known as the Parliament Palace, the second largest administrative building in the world (after the Pentagon).  Or a could be a normal person and take the tour.

With almost fifty percent of the country semi-natural, there are lots of hikes, mountain bike tours, horseback riding, skiing, golfing, fishing… I don’t think you’ll be bored in Romania.

So what do you say, shall we give Romania a try?