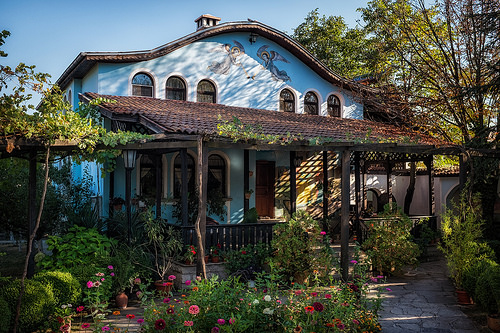 Wow, November kind of snuck up on me. Please accept my apologies for the lateness of this blog post. As we’ve been loitering around south-eastern Europe for a few months now, we might as well head a little further north to Bulgaria. Guess what, one of my daughters is named after its capital, Sofia.

Aside from an elegantly named capital, let’s see what else is interesting about this Black Sea-bordering country. I bet you haven’t heard many people say, “I’m off to Bulgaria on holiday.” Or, “Pick up a bottle of Bulgarian red wine while you’re out.” However, according to Lonely Planet, Bulgaria is a “mysterious, multi-layered country, with ski-fields as fantastic as its beaches.” Although I do wonder at the term ski field as I much prefer skiing on mountains rather than fields, but I guess it comes down to whatever floats your boat.

Bulgaria is also supposed to be a haven for hikers and mountain bikers. The country boasts seven mountain ranges, glacial lakes, and forests with bears, wolves, and lynxes but depending on your view of possibly being eaten, I’ll let you decide if this is a good thing or not. Some of the photos I’ve seen, however, are stunning so if the outdoors is your thing, definitely check out Bulgaria.

Given its geographic location, the country is also full of historical sites. From Neolithic settlements hidden in riverside caves, to Thracian tombs and Roman cities, Bulgaria has history for everyone. Plovdiv is Europe’s oldest continually inhabited city and will be a European Capital of Culture in 2019. It’s cobblestoned lanes and romantic old town is packed with museums, galleries and guesthouses located in colorful 19th-century mansions. If you fancy pretending you’re a medieval tsar, then head over to Veliko Târnovo. The site has more than 400 houses, 18 churches, the royal palace, and an execution rock. The original structures were destroyed in 1393 during a Turkish invasion but have been restored. Wander carefully, potholes, lose steps and sudden drops are common.

After all this history, a wee break at the beach sounds like a good idea and Bulgaria has a long, sandy Black Sea coast with resorts to rival those of western Europe. Varna and Burgas are two seaside cities famous for summer festivals and nightlife. If you prefer your beach scene a little quieter, then the recommendation is to head to the far north or south where picturesque ancient towns are waiting to welcome you.

So, with all there is to see and do, I’m sure soon you will be hearing, “I’m off to Bulgaria on holiday.” Who knows, maybe I’ll be able to include it in my 2017 European Adventure and take my daughter to her namesake city.

Happy travels and reading, everyone.