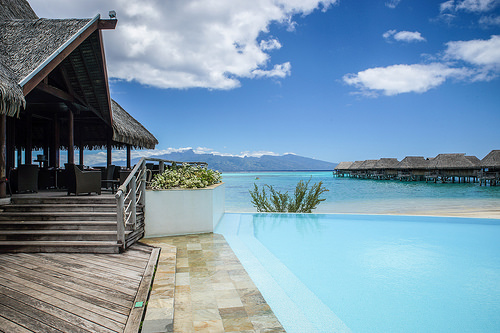 Miss me? I took a month off blogging, my first in over four years (except for the time when I had to rebuild my website), to concentrate on a couple of other projects. Stand by for some hopefully awesome news in the next few months. And if you haven’t already, sign up for my newsletter as that’s where I’ll be telling people first.

Anyhow, it’s freezing cold here and there’s at least three feet of snow out my front door, so rather than continue our journey around Eastern Europe, let’s head somewhere warmer – Tahiti. It’s on my bucket list of places to visit and is looking mighty good right now when the weather here is below zero Celsius. First, some facts: Tahiti is the largest of 118 islands and atolls in French Polynesia and is roughly halfway between California and Australia. Technically part of France, the official language is French although Tahitian is widely spoken.

Only 45 kilometers at its widest point, it’s not a huge island, in fact it’s actually more like two volcanic islands, one slightly smaller than the other, connected by an isthmus. (I knew those geography lessons would come in handy one day.) Located near the equator, Tahiti has a year-round warm climate with more sun and less rainfall than Hawaii. The average daily temperature is 25C and the water temperature near the same. “Summer” months are November through April when it’s slightly warmer and more humid. “Winter” is May through October when it’s cooler but also drier.

I was first introduced to the island of Tahiti through the pages of Mutiny on the Bounty and the paintings by Paul Gaugin from his time on the island.  Since then, Tahiti and the surrounding islands have become a mecca for travelers seeking sun and relaxation. But, supposing you could drag yourself away from your bungalow over the ocean, what’s there to do?

The number one attraction is the market in Pape’ete. Covering an entire city block, this is where you shop for colorful sarongs, shell necklaces and woven hats. You can also get lunch here from the vendors, including Ma’a Tahiti, traditional Tahitian food. Or you could visit a couple of pearl museums, and one for Gaugin which may or may not be open (check before you head there), and a lagoonarium. The lagoonarium (what a great word) is reached through the Captain Bligh restaurant and is evidently free if you eat there first. It (the lagoonarium, not the restaurant) has an underwater viewing area where you can watch the fishes without getting your feet wet.

A visit to the botanical gardens would be on my to-do list although if you go, either take bug spray or my preferred mosquito repellant: someone they enjoy biting more than you. My top touristy thing to do, however, would be an all-day Jeep safari into the inner island—archeological sites, blowholes, waterfalls, and rainforest walks—sounds like an amazing day.

So there you have it – Tahiti. Next post we’ll pop over to Bora Bora, also on my bucket list. Until then, stay warm.