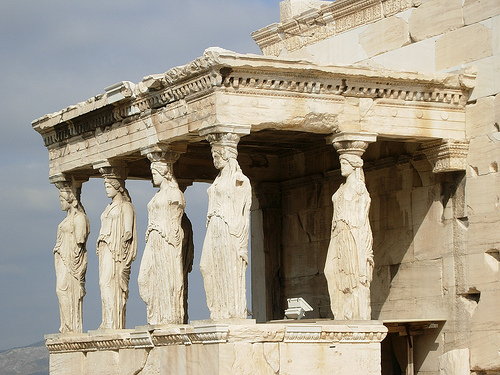 We’ll slip down south from Macedonia and into Greece for today’s post. I’ve been to Greece. Twice technically although once was only to change plans. I was taking my mother to Egypt, we landed at Athens airport, she looked around and said, “It looks just like Kamloops.” Great, I take my mother on an epic around-the-world adventure, to the cradle of civilization, and she compares it to a pokey town four hours from where she grew up in British Columbia, Canada.

The first time I went to Greece, however, I was alone, but on a very tight budget having already spent most of my money. The first thing to know about Greece is that the plumbing system is original to when Alexander the Great ruled the place, so you can’t actually put toilet paper into the toilet, you’re supposed to put it in a waste bin next to the toilet. Result, the washrooms stink. This may have improved since I was there, and maybe newer hotels don’t have this issue, but if you stay in a dive like I did, be prepared.

Second, Athens is amazing. The Parthenon is fabulous and the way they light it up at night is breathtaking. There are also fabulous views from up there so be sure to take a good camera. Another highlight of Athens is the National Archaeological Museum which I believe was free one day a week when I was there but given the state of Greece’s finances, they undoubtedly removed that now. But trust me, it’s worth it. I spent many happy hours wandering around this museum.

My time in Athens was, however limited as I was joining a tour in Istanbul, Turkey in a few days’ time. So I took a night bus to Kavala in northern Greece. I think I was the only foreigner, at least the only woman on the bus, so it was a bit intimidating. In the middle of the night we stopped at Thessaloniki so the driver could have a break. We all had to get off but I had no idea how long we were staying so didn’t risk going into the nearby café. Twenty minutes later when we were allowed back on the bus, I was frozen. From Kavala I had planned to visit the town of Philippi but soon discovered that the bus I’d hoped to get to Istanbul the next day either wasn’t running or was full so I needed to take the night train from Xanthi.

With a whole day to kill and nowhere to store my bag, I found a nice park and set about reading a book and people watching. An elderly lady walked by me, stopped, and then returned and offered me a pear from her shopping. Of all amazing the things I’d seen in Greece, the mishaps and misadventures, this was my over-riding memory—an elderly widow (I’m guessing because she was dressed all in black) offering me a piece of fruit. Her kindness touched my heart.

When I finally got the bus to Xanthi, I discovered that the train station was not near the bus stop. I wandered around for a while before pulling out my Greek phrasebook and asking a couple eating at an outdoor café, in Greek, if they knew the way to the train station. Well, my Greek must have been amazing because they answered in perfect English and told me it was too far to walk and I’d have to get a taxi. At least they’d understood what I said. My train trip to Istanbul was another adventure, but not one I will commit to writing.

I still have dreams of touring more of Greece, definitely visiting some of the islands. But in the meantime, I’ve had to content myself with research for writing my book, The Greek’s Stowaway Bride. It’s one of my favourite books I’ve written (the heroine was unstoppable) so if you haven’t read it yet, be sure to pick it up.