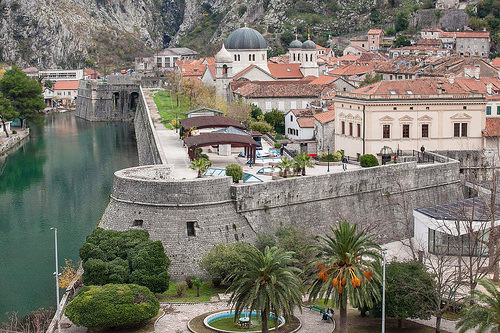 In keeping with my last post on Albania, we’re going to continue to explore this corner of Europe and it’s oft-forgotten countries. Today let’s visit Montenegro on the Adriatic Sea. To the south of this country is Albania, to the north Bosnia and Herzegovina, and Kosovo and Serbia are to the east. There is also a sliver of Croatia along the north west corner. Montenegro means black mountain and many other countries have translated this name literally into their language so it’s called Crna Gora in Montenegrin. It became an independent country in 2006. From 1918 to 2006 it was part of Yugoslavia, although in 2002/2003 it joined forces with Serbia. Montenegro also has a royal family to “promote Montenegrin identity, culture and traditions through cultural, humanitarian and other non-political activities” the post is currently held by Nikola II Petrović-Njegoš, Crown Prince of Montenegro.

Of course this area has been inhabited for centuries and is full of history. If you’re not into the past, then the present has plenty to offer as well. Here’s a quote from the Lonely Planet site: “Mountains jut sharply from crystal-clear waters in such a way that the word 'looming' is unavoidable. As if that wasn't picturesque enough, ancient walled towns cling to the rocks and dip their feet in the water like they're the ones on holiday. In summer the whole scene is bathed in the scent of wild herbs, conifers and Mediterranean blossoms. The word 'magical' is similarly impossible to avoid.” (Read more: http://www.lonelyplanet.com/montenegro/introduction#ixzz4EnTIDMPg)

Some facts to drop into conversation at your next cocktail party: Montenegro has a population of just over 650,000, the capital is Podgorica (the old royal capital is Cetinje), it has 294 km of coastline of which 73 km is made up of 117 beaches although the majority of them must be very small because the incredibly aptly named Long Beach is 13 km long. So, aside from going to the beach, what else is there to do in this small but stunning country?

The first place to visit is Kotor, an ancient walled city set in a spectacular bay. Another place to visit is the Njegoš Mausoleum set atop Montenegro’s second highest peak, Jezerski Vrh, its in Lovćen National Park. Another must-see destination is Perast which according to Lonely Planet looks like a chunk of Venice floated down the Adriatic and anchored itself in the bay. Wants something a little more active? You can raft on the Tara River in summer or go skiing in the winter. Or, if you’re really adventurous, climb several of the amazing mountain peaks.

So, looks like I’ve got another place to add to my bucket list and a potential setting for a book. Have you been to Montenegro? I’d love to hear what you suggest. See you back here in August and I apologize for the delay in this post, I was out of town for a few days and thought I’d have time to put it up on my website, but I didn’t. Cheers!