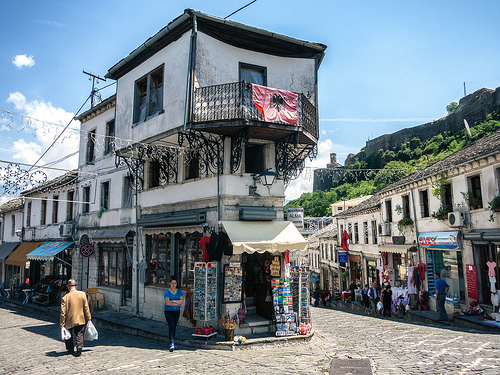 I know very little about this European country, and I imagine most people are in the same position. However, as I watched their football (soccer) team play during Euro2016, I thought I’d investigate a little. I had done some surface research when I wrote The Greek’s Stowaway Bride as it makes reference to the country several times.

Located across the Adriatic Sea from Italy, Albania’s southern border is with Greece, it’s eastern border shared with Kosovo and Macedonia and to the north is Montenegro. Part of the Ottoman Empire until 1912, Albania was conquered by Italy in 1939 and then occupied by Germany in 1943. It became communist in 1944. Ruled by a xenophobic dictator, the country was basically closed until the early 1990s when it became a democracy. Since then Albania has struggled to catch up with the rest of Europe as regards its infrastructure and market economy.

Many of the communist-era buildings have been painted bright colors, but I understand that inside they are falling apart. Likewise, for a country where ownership of personal vehicles was banned until the 1990s, the roadways are poorly paved and anyone driving is cautioned that large potholes, or boulders out of town, often litter the route. Air pollution is also an issue as many of the cars are older, more polluting models rejected by the rest of Europe.

Enough of the negative, though, if you want to add Tirana or Albania to your ‘been there, done that’ list, what would you do or see in the country? The number one place to visit on several of the sites I researched was a trip to Mount Dajti National Park. You can take a cable car (built by an Austrian company if that reassures you) to near the top and then hike the various trails or just enjoy the view. Evidently many Albanian’s go there for picnic lunches but if you didn’t pack your own food, you can enjoy a lamb feast along with the views at the Panorama Restaurant.

The national history museum is also highly rated. Most of the signage is in English except in the new exhibit that pays homage to those persecuted under the communist regime. Having been occupied for centuries, Albania has lots of historical sites. Unfortunately, many are buried under buildings or only partly excavated. The 15-20,000 seat amphitheater at Durrës has a few occupied houses on the stage. There are several castles to visit and an ancient city site called Butrint where the ruins span a 2500-year period. What caught my eye, however, were the caves of Pellumbas which is outside the village of the same name. The village in itself seems worth the visit, a true picture of Albanian life past, present and future. The village boasts two cafés, so stop at one before you head to the caves and the other on the trip back. By the way, the road to the village is noted as “treacherous” so you may want to leave the driving to someone else.

That’s it for Albania for this post. If you’ve been to this not-often-heard-of country, I’d love to hear from you. Otherwise, I’ll see you back here on the 15th for another exciting destination. In the meantime, I’ll be watching more Euro2016 football. Go, Iceland!