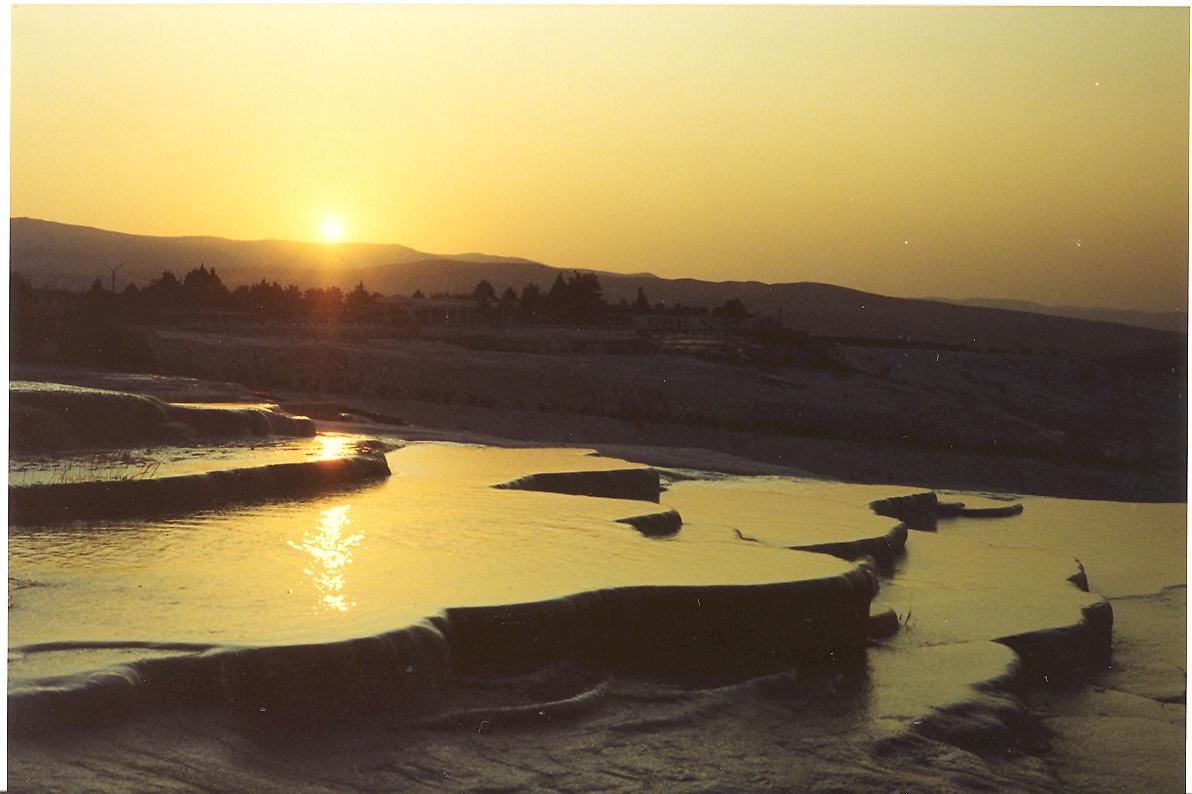 Due to overwhelming demand… Okay, so no demand (not even one single request), I went through some of my travel photos and was reminded of this interesting place, Pamukkale in Turkey. Of course I was there many years ago so it has undoubtedly changed. This area was designated a World Heritage Site in 1988 and I understand has undergone a revamp with some of the roads being diverted and the hotels that were built right on the terraces removed.

Pamukkale is Turkish for “cotton castle” and refers to the white travertine terraces covered in calcium carbonate with pools of warm water. It is in the Denizli Province in southwestern Turkey. It is also next to the site of the ancient Greco-Roman city of Hierapolis where thousands of years ago the sick came to soothe their ailments in the warm, mineral rich waters.

When I was there, in the early 90’s, one of the hotels had its swimming pool right over some of the ruins. You could swim amongst the remains of the ancient city in the naturally heated water.  I believe these are now called the Cleopatra Pools.  Bathing there is not without risk. Not only did I sustain a rather nasty bump on the knee on a Roman column (not something that normally happens while swimming) but also ended up with a painful UTI. If you don’t know what a UTI is, don’t look it up, just take my word for it that they are unpleasant. But would I do it again? Probably.

I was thinking of incorporating this area into one of my novels, then I read the following from the Pamukkale.net site under Legends: There was a young girl who was unmarried and ugly. As no one wanted to marry her, she decided to commit suicide and she threw herself off the travertine and fell into a natural pool but did not die. Because of the water in the natural pool she turned into a very beautiful girl and caught the attraction of the lord of Denizli while he was passing by. At that moment, the lord fell in love with this young and beautiful girl and they soon got married.  Seems it’s already been written.

Pamukkale is only one of the Turkish sites that has me eager to return to this fascinating country. Next post I’ll share with you some information on Cappadocia. If you’ve been to either Pamukkale or Cappadocia I’d love to hear your thoughts or experiences.