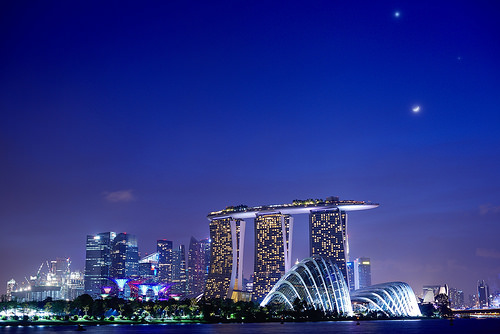 Okay, I’ll admit it, it has been *clears throat* twenty-odd years since I was last in Singapore. As a mere slip of a girl on her first world-wide adventure, the ordered cleanliness of Singapore was a welcome reprieve from the rest of Asia’s chaos. There were lines on the road and, for the most part, drivers stayed within them. No cows wandered in the streets, chickens were nowhere to be seen, or heard, and I could read the signs, always a bonus. That’s not to say that Singapore has been completely cleansed of its Asian-ness. I stayed with friends while I was in Singapore so was able to experience the “real Singapore” rather than just the regular tourist fare. We ate lunch at what I now realize is called a Hawker Center, although for me it was an under-apartment-building-food-court. If you go to Singapore I really suggest you try this at least once.

However, as it has been such a long time since I was there, I did have to do quite a bit of research for the elements in my story, Singapore Fling, that take place in the city-state. The skyline has definitely changed since my visit, the Marina Bay area and Waterfront Promenade have all been built since I was there and the Singapore Flyer is new as well. However the Botanical Gardens, which I enjoyed, have been around for more than 150 years and are worth a visit as is the iconic Raffles Hotel. Even if you are staying elsewhere, have a drink in the Raffles Long Bar, home of the Singapore Sling. Or if you’re a writer, dream up your next masterpiece while imbibing a suitably inspirational beverage in the Writers Bar.

With Singapore’s diverse population, Malay, Chinese, Tamil and English speaking, with lots of ex-pat British people, there is something to interest everyone. Whether it’s listening to a Chinese opera performance, shopping at the market stalls of Little India or the luxury boutiques of Orchard Road, or thrilling to the spectacle of Formula 1’s only night race, Singapore is an exciting, diverse city sure to enthral even the most jaded traveller.

For the next post, however, we will leave Singapore and move on to Manila, Philippines. Join me there on January 15th. In the meantime, leave a comment with your Singapore experience, I’d love to hear what you thought.