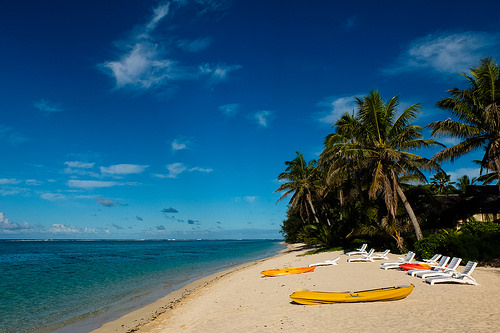 No, I haven’t started making places up for my blog. My friends recently told me that they got a great deal on a holiday there so I thought I’d check it out. As I used to live in New Zealand, the name did ring a few bells as it was once a Kiwi colony. Let’s discover this tiny Pacific island, the capital and most populous of the Cook Islands.

If you were to draw a line between Queensland, Australia and Bolivia in South America, the Cook Islands would be about halfway along that line. The Cook Islands are spread over an area roughly the size of India with a total population of approximately 15,000 – 10,000 of which live on the island of Rarotonga. So if overcrowding is getting you down, this or one of the outer islands may be the place for you.

Just looking at a few of the activities available on Rarotonga, I’ve already filled two nights. The first night, just to get a feel for the local culture, of course, I’d do the sunset cocktail hop by tuk tuk. The tour takes you to the best places for sipping on cocktails while watching the sun set over the reef. Sounds like the perfect introduction to island life. The next night, I’d take the ‘Fire on Water Night Paddling Tour of Rarotonga.’ Basically, you go at sunset on a paddle board or kayak and see the marine life at dusk. I believe there is also a fire dance performance which sounds cool, or I guess more accurately, hot.

If you want to see the fish but would rather not get wet, there is a glass-bottom lagoon cruise you can do however this tour comes with a warning – ukelele playing guides. If you’re not a fan of this instrument, you may want to find another option or pack headache tablets.

As in Tahiti and Bora Bora, there are also Jeep safaris you can take into the interior which is cloaked in dense vegetation. The difficult terrain and lack of infrastructure mean this part of the island has few inhabitants. The entire island is surrounded by a coral reef, although at the north of the island this is very close to shore but it the south it is farther away, making this the best area for watersports.

The island has been inhabited for centuries, in fact some say that the old road that runs around most of Rarotonga was first built 1200 years ago. The only ancient site that I could see mentioned was the marae called Arai-Te-Tonga where there is a stone-marked open air royal courtyard and other meeting grounds. You could pair this with visiting the Te Vara Nui cultural village where you can also enjoy a traditional umu buffet (food cooked in an earth oven) and an after-dark show.

Accommodation on the island varies from basic to luxurious so depending on your budget there are plenty of choices. I guess I’ll soon be looking for cheap flights to Rarotonga as well.

Until next time, keep calm and read on.