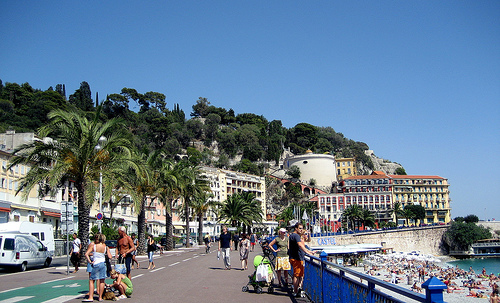 The last Formula 1 race was held in Monaco (don’t get me started on the results), but as I’d already blogged about Monaco and my attendance at the Grand Prix here, I thought this time I’d talk about the nearby city of Nice. Nice is nice, very nice, you should go.

I have actually been there twice. The first time I was a single, young woman and I arrived by overnight train from Biaritz. I stayed at the youth hostel and one day I went to Cannes, where the film festival was on. Along with a hundred other people, I stared at a hotel for ten minutes, hoping to catch sight of a star, but I couldn’t be bothered to wait any longer so left. I also made a daytrip to Monaco, two days actually, the first I wandered around the city and the second time was for the race.

If you’re going to go to the south of France, then Nice is an ideal location as you can easily get to all these other places on the train. The second time I visited was with my husband and eight month old baby daughter. France, like many European countries is actually great for travelling with babies. People seem to be a lot more accepting of the interruptions tiny people make than they are in North America.

One day, at lunch, we stopped in a little café and ordered some pasta for my daughter. This was back in the day when you started your babies on solid food at three months so by eight months she’d already graduated to spaghetti. Anyway, the pasta arrived without any sauce so we let the baby feed herself. There was spaghetti everywhere. I think the lady sitting next to us even had some on her hat. Realizing the mess my daughter was making, we tried to feed her, but everyone around (including hat lady) just said, “She’s enjoying her food, let her be.”

Nice has a fabulous Esplanade to parade down, with loads of expensive sports cars cruising down the road next to the beach. There is also a fabulous old town to wander around, complete with weekend markets with produce from the local area (at least when I was there) and “antiques”. So, with Cannes just down the road, and Monaco a mere 20 minutes away by train, plus all the inland villages to explore, you could very easily spend a happy week in Nice. But here’s a little travel tip: the nearby town of Menton, France (the other side of Monaco), is equally as charming and half the price for accommodation and food, because it doesn’t have the cachet of Nice. I say, stuff the cachet and eat and sleep cheaper, more money for wine and train trips. Plus, Menton has a sandy beach whereas the one right in Nice is pebbles.

Whatever you decided to do, slap on a hat, sunglasses and watch the beau monde go by.

Next F1 race is in Montreal, Canada so I’ll be blogging about my visits there (I actually lived in Montreal for 2 years when I was very young). See you on the 15th.