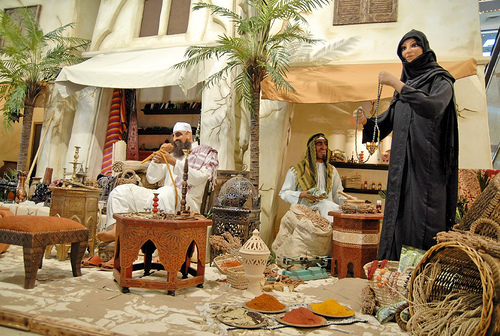 So, Bahrain … been there? Yeah, me neither. Know where it is? Vaguely? That’s about all I know as well. Let’s take a minute and virtually visit this small island country. First, it’s location. It’s in the Persian Gulf, east of Saudi Arabia to which it is connected by a causeway, and 200 km south of Iran. Qatar lies to the southeast, across the Gulf of Bahrain.  It’s slightly larger than the city of Hamburg or the Isle of Man. The capital is Manama - feel free to start a conversation at your next cocktail party with that interesting factoid.

Originally an archipelago of 33 islands, due to land reclamation there are now 84. I guess that’s a preferable way of increasing a country’s territory than war. During the last Formula 1 race, one of the commentators claimed that the sea around the main island of Bahrain was so shallow that a person could walk for 4 miles from shore and only be up to their waist in water.

92% of Bahrain is dessert. So if sand isn’t your thing, then you may want to skip visiting this country. Even if you are a beach lover, I understand that due to land reclamation projects, there are actually few beaches and the ones that remain charge to visit them.

What is there to do, then? Well, of course, there’s the Formula 1 race in April. Aside from that, you could visit the Bahrain National Museum that chronicles 4,000 years of Bahraini history. If you want to get up close and personal with the country’s past, you could also visit the Qalat al-Bahrain site, which is the location of the former capital of Dilmun and is apparently one of the most prolific archaeological digs in the Arabian Gulf. Want something a little less … ruined? You can tour some traditional houses which are now dedicated to various arts. Bahrain is also home to the largest prehistoric burial cemetery in the world. Go figure. I guess all that sand is good for something. According to the Bahrain dot come website, local potters now use some of the burial chambers as kilns.

One of the oddest tourist attractions I saw however, was the so called Tree of Life. You know a country is desertified (yes, I made that word up) if a tree is a tourist attraction. The Bahrain dot com website claims the tree is 400 years old and 32 feet high. Maybe it’s a typo because as far as trees go, that’s not very impressive. But evidently 50,000 people visit it every year, so what do I know.

I’m sure there are other things to do and see, and if you’re in Saudi Arabia, a visit to Bahrain might be the break you need. I understand that it is popular with travelers for its authentic "Arabness" without the strict application of Islamic law on non-Muslims. I’m afraid, however, that at the moment Bahrain is not on my bucket list.

Next Formula 1 race is in Barcelona. I have been there and do recommend it. So pop back on the 15th of May and let’s see what’s to do in this Spanish city. In the meantime, if you’ve been to Bahrain, feel free to comment and let me know what I’m missing.