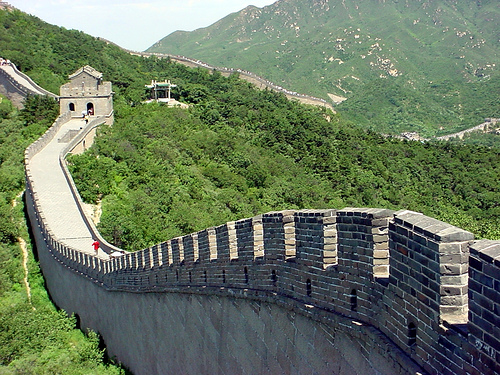 Who watched the last Formula 1 race in Shanghai? Not the most thrilling of races but it had its moments. I’ve always wanted to go to China, it’s on my bucket list. So If I had limitless funds, and time, this is what I’d do.

First, I’d walk the Great Wall of China. I know the sections of the wall comprise over 20,000 kms. But I’d like to get away from the crowds, find a section of the wall away from tourists and walk for a few days just enjoying the countryside, the views and to imagine all the history those stones have been part of. I think if I did go to China and only saw the parts that every other tourist saw, I’d be horribly disappointed. But then my record with finding ancient walls is dismal. My husband and I once spent three days trying to find Hadrian’s Wall in England with no success. But there were mitigating reasons for that, one of which is my terrible map reading skills (pre GPS) and the other an outbreak of hoof and mouth which shut down all the countryside.

But back to China. The second thing I’d like to see is the Terracotta Army. Yes, select pieces of the Army have travelled to museums around the world. But there’s nothing like seeing it in situ. I imagine all the painstaking labor that went into creating this multitude of figures, and all for a dead guy. It is estimated that up to 700,000 workers may have been involved in making the Army. At least their work is being recognized now but I wonder how they felt going home at the end of each day knowing their hard work was just going to be buried with the Emperor.

Next on my must-do itinerary would be a river cruise on the Li River. I had heard that the Yangtze, the largest river in Asia was the one to visit but I understand that pollution and recent hydroelectric projects have spoiled much of the scenery. I would be more than happy to be wrong on this point. Either way, I’d like to spend a couple of days on the water, watching China drift by my deck lounger. Is that too much to ask?

Other people would have different things on their China list – seeing Giant Pandas, the Forbidden City or some of the buildings in Shanghai or Beijing. I’ve heard of the markets and rice paddies and the Yellow Mountains. And yes, I’d fancy these things, too. But I could be happy with just my three wishes. How about you? Have you been to China? Any desire to go? Please let me know before our next stop – Bahrain.