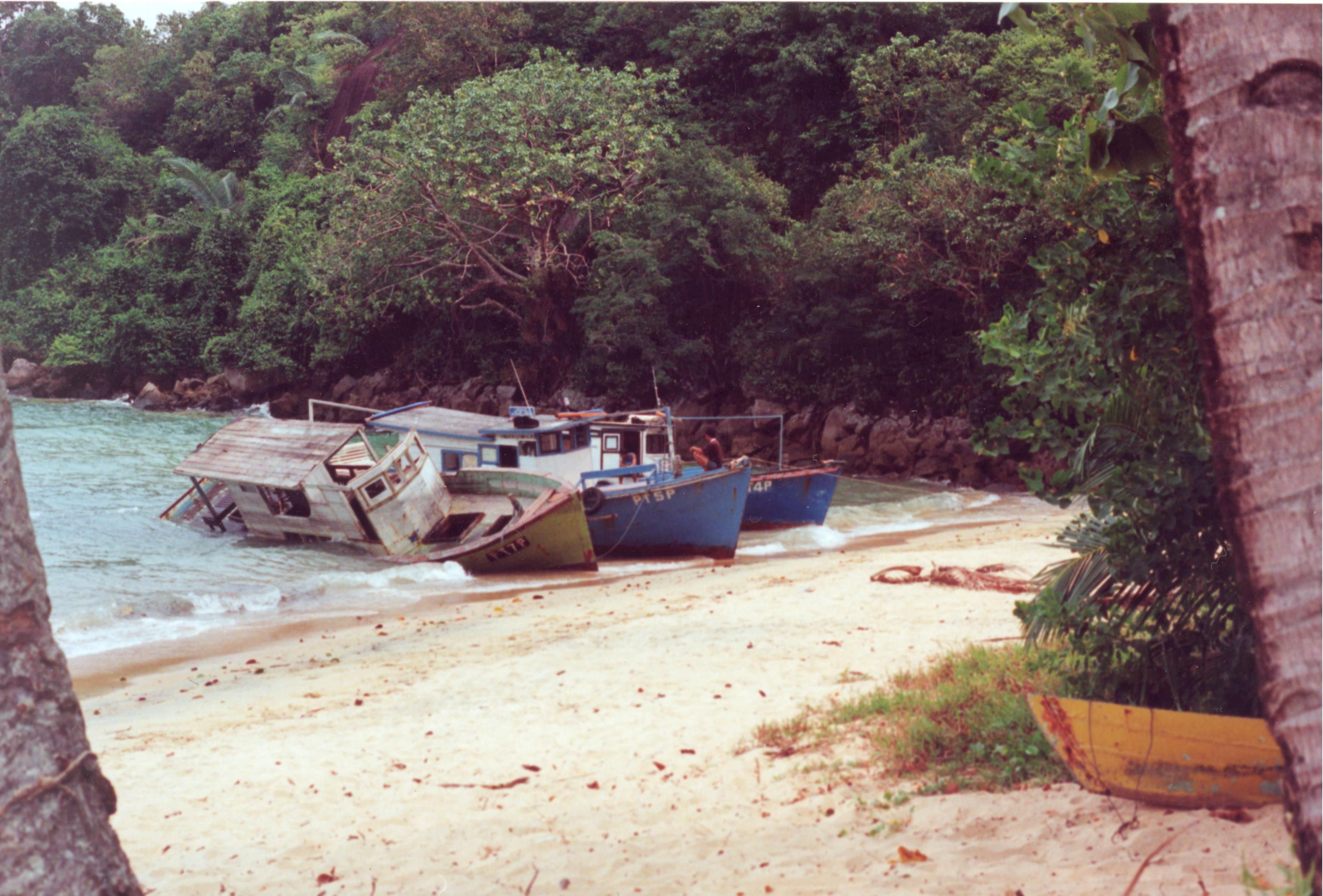 So, following the Formula 1 races, this time we’ll stop in Malaysia. Technically, I could say I was in Malaysia twice. I flew into Kuala Lumpur from Australia, travelled down to Malacca by share-taxi and then went to Singapore. After Singapore, I returned to Malaysia, visiting a small island in the South China Sea. I’m afraid it was so long ago that I can’t remember the name of the island. I do remember taking a rickety old bus from Singapore, then getting on an equally rickety fishing boat (like the ones in the picture) along with several other backpackers and after an hour or so we arrived at the island.

As it was a small island, cheap accommodation was in limited supply, so a guy I met on the bus ended up in the beachfront cabin next to me. As we both spoke English, in fact I think he was from England, we chummed up and went to dinner together. If you’ve ever travelled in countries where English is not the local language, you’ll find that after a few weeks you’ll talk to just about anyone who speaks your language. Anyway, this guy and I used to eat at a restaurant right on the beach. The waiter obviously thought we were a couple and wouldn’t speak with me, he would always ask the guy I was with what I wanted to eat. To me, I thought it was funny, because I was only subject to it for a few days. It did open my eyes to the plight of women who are ignored or sidelined because of their gender.

Malaysia was the first predominantly Muslim country that I visited. Before I arrived, I research local customs and cultural observances. So when I first arrived in KL, I was very careful to sit with my feet planted firmly on the floor as I’d read that to show the soles of your foot is considered very rude. However when I arrived at the taxi-share depot, all the men were sitting with their feet crossed over their knees. So much for research.

I spent the last few days of my stay in Malaysia in Kuala Lumpur. This was before the Petronas Towers, swanky malls and roof-top bars. It was the old, colonial KL that I saw. With bird sellers and people sweeping streets with brooms. Friendly people who didn’t look down on a lone woman travelling through their country. Even when I got on the local bus with my massive backpack they didn’t complain – at least not in English. And before you think I was super brave to travel alone. When I was in KL I met an Australian woman who had spent 18 months travelling around South America with her 2 year old son. He was only a baby of 6 months when she started her journey. Now that takes courage.

I’d love to go back to Malaysia—spend more time in Malacca, visit the new KL, maybe go to one of those fabulous beach resorts rather than the backpacker dives. Until then I can only dream.

As the next F1 race is in China that will be our next destination. I haven’t been there, or set a book in that area, although in Singapore Fling Jeremy and Lalita visited two offices there outside of the story. However, China is on my bucket list so I’ll talk a bit about the places I’d love to go if I ever had the opportunity.

Until April 15th, then. And if you’ve been to Malaysia, tell me what your favourite place was, or suggestions of where I should go if I get the opportunity to return. Cheers!