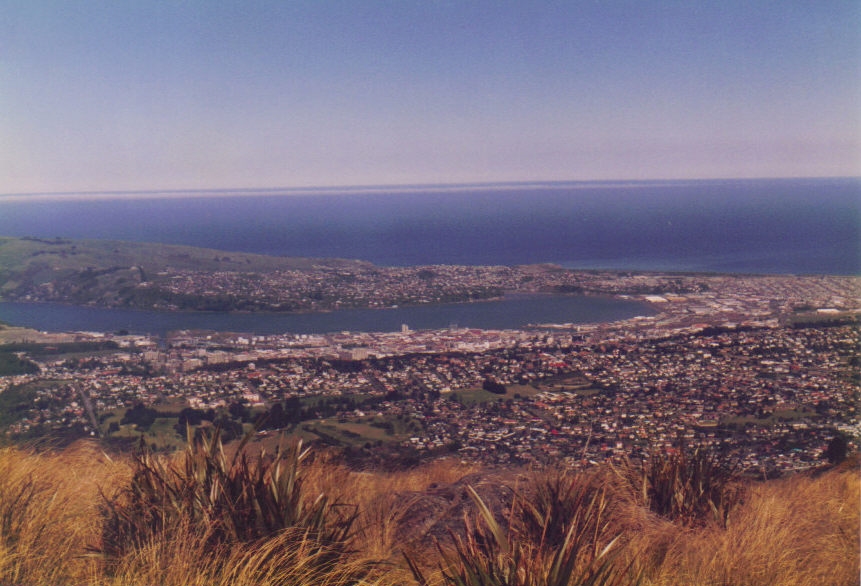 As last post we were down under in Sydney, I thought we’d just skip across the ditch and visit New Zealand, specifically the place I called home for a year, Dunedin. Alright, I’ll wait a moment while you get out your map. South Island, find Christchurch then head south, got it? Now, the other thing to clear up, the pronunciation, it’s not dune-din as I first thought when told we were moving there, it’s du-nee-din.

Dunedin has heaps of scarfies at uni, translation the town has lots of students attending the university, the oldest in the country. I myself went to University of Otago for a year, studying French and Russian, and loved it. Would have liked to have finished my degree but my visa was only for a year so when that time was up I had to leave. Pause for small sobbing episode.

Irrelevant fact number one about Dunedin is that it is called the Edinburgh of the south. I’ve been to both cities and can’t say there is a strong resemblance, some of the street names, perhaps and some of the older buildings are constructed in the same colour stone as some in the Scottish city. Irrelevant fact number two, Dunedin claims to have the steepest street in the world, Baldwin Street. I’ve been down it, and it is indeed pretty scary.

There are also some amazing buildings in Dunedin, the train station, the university Clocktower, the City Hall…the list goes on. But don’t come to Dunedin for the buildings, or the fabulous cafés and bakeries, wonderful St. Clair beach—come for the people. Dunedin-ites are a quirky, delightful bunch and I made friendships during my year there that last until today. I can’t say that about all the places I’ve lived or visited.

And when you’re done with visiting the art gallery and Cadbury World (yum, chocolate) then go for a tramp. No, it’s not dumpster diving as we’d say in North America, it’s the Kiwi term for hiking. There are heaps (sorry, couldn’t help myself) of great hikes around Dunedin, or drive up and down the coast for some amazing scenery.

So, next time you’re in NZ and find yourself on the South Island, don’t just go to Christchurch and Queenstown, spare a couple days for the Edinburgh of the south and recharge your mind and heart.