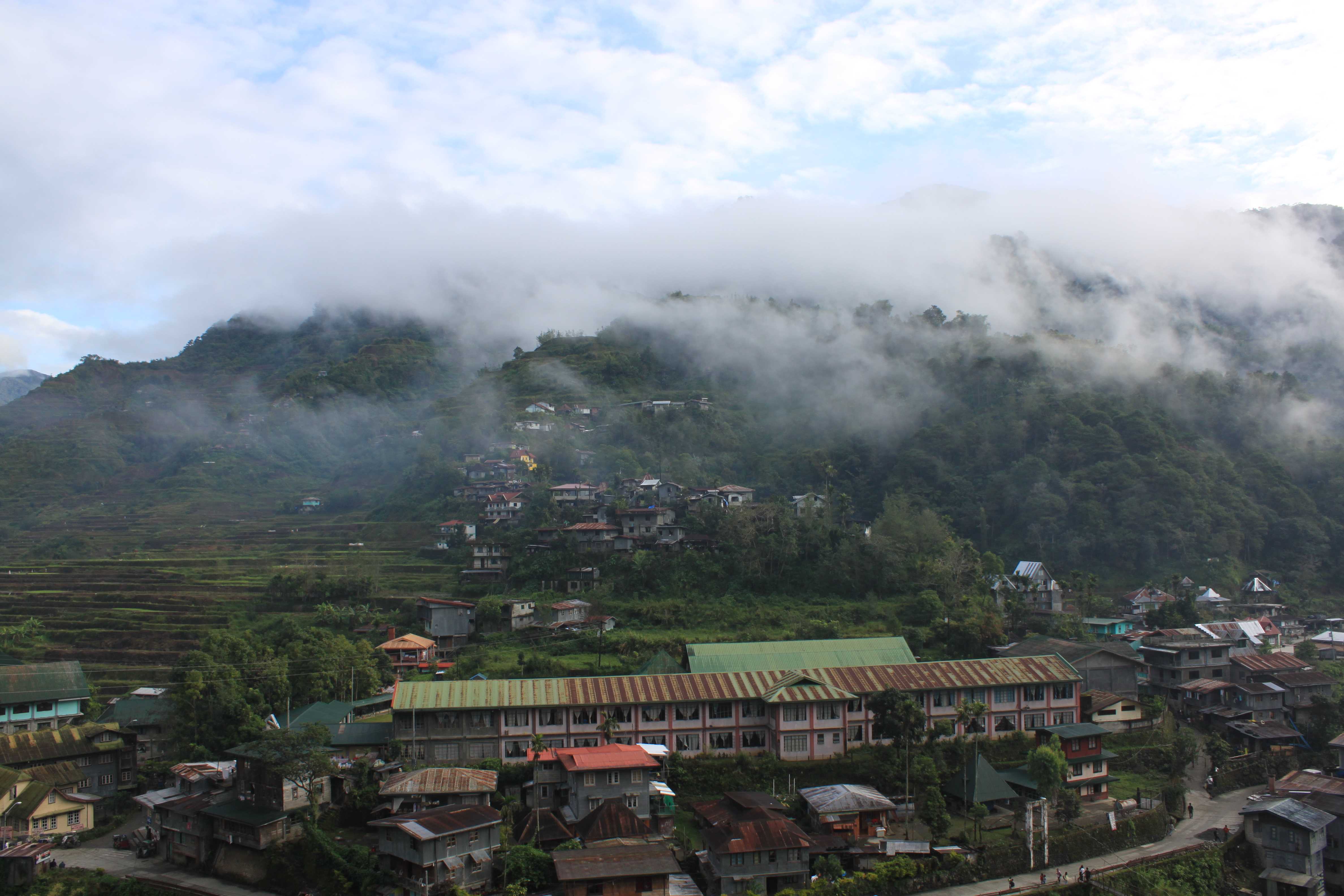 I was going to blog about some places I’ve been to in Russia, but then I thought I’d have to explain, again, that I was there years and years ago. So, I decided that maybe I should talk about someplace I’ve been more recently. Thus, today we are going to Banaue. “To where?” you ask, puzzled, reaching for your atlas.

Banaue (pronounced Ban-ow-ay, at least that’s how I pronounce it) is in the northern part of the island of Luzon in the Philippines. The village itself is quaint and worth a visit, if you have lots of time in the country, but the real draw is the nearby rice terraces, built over 2,000 years ago. You know my love of history, how could I resist?

It all starts with an epic trip. You’ve all seen Romancing the Stone when Kathleen Turner gets on the wrong bus, you’ll know what I mean. Well, it wasn’t quite as bad as that, but not by much. First we had to get the bus at 5 a.m. If I was to walk downtown Vancouver at that time of the morning I wouldn’t meet many people. However, in the tiny town of Gerona in central Luzon where I was staying, it was bustling. Girls in skimpy dresses were crawling out of the karaoke bars, workers were eating breakfast in tiny road-side cafes and trike drivers were cruising the streets, looking for fares or sharing their previous day’s tales with fellow drivers.

Once on the bus, the back of my seat was broken, requiring me to hold myself upright for the whole seven hour journey, and we weren’t even there yet. Now, bearing in mind that from Gerona, Central Luzon to Banaue, in the Cordillera region is only approximately 240 km, you’d think it would only take 3 or 4 hours max to get there. No. Seven hours on the bus to Solano, then we switched to a jeepney for another hour trip, complete with boxes of dead chickens on the roof. And we still weren’t there.

Transferring to another jeepney in Lagawe, we made the final trek on narrow mountain roads and I think I was rather glad I couldn’t see out the window, given the state of the road and the lack of barriers to the valley far below. One lady had brought fish for her dinner, putting it on the floor, only to have the lady next to her put her new air conditioner on top of it. Air conditioner 1 – Fish 0, malodorous rest of the journey with a fish scented backpack (mine) end of game.

When we finally arrived in Banaue, more than ten hours after we’d left Gerona, we were exhausted, nauseated, and starving. Accommodation in Banaue is fairly basic, although the hoteliers are friendly enough. By the time we got there, the choice was moldy or sewer-y. We went for sewer-y, and after a decent meal we thought we’d lay down for an hour or so and then explore the town. Next thing I knew it was six the next morning.

But despite the horrific journey, the aromatic accommodation and the rooster that starting crowing across the street at four in the morning, the sights and experiences were so amazing I’d do it all again. Next post I’ll talk about the reason why, if you’re ever in the Philippines, you should make the monumental effort to visit Banaue and area.