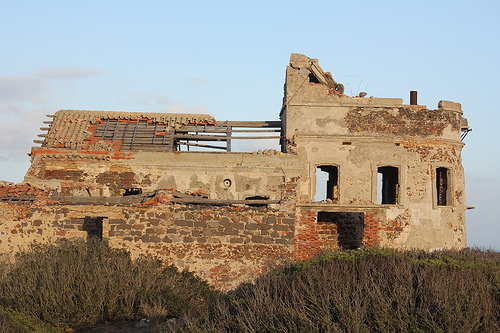 At the beginning of the year, there was a news story that peaked my interest and got me dreaming. It was about a town in Sardinia, Italy called Ollolai that was selling abandoned homes for one euro each on the signed promise that they be restored according to the original architecture (at a cost of approximately €25,000) within a three-year timeframe. The town was also offering language and basket weaving lessons (the local craftwork) to help newcomers integrate into the local culture. This is my dream.

Or my nightmare. When I lived in England, my husband and I would watch a TV show (I think it was Grand Designs Abroad) where a couple, occasionally a family, would buy a nearly destroyed historical property in Europe and then fix it up. There was always the inevitable language difficulties, budget-blowing disasters, and local red tape to overcome, but at the end the property owners had an amazing home that they wouldn’t have been able to find in the UK. I would watch avidly, taking mental notes, while my husband hid my passport and added another layer of security to our joint bank account.

After reading the article about the homes for sale in Sardinia, I spent two weeks researching the area. It’s located near a National Park in the center of Sardinia, a hilly (some would say mountainous) area of natural beauty. From the photos, it looked like they occasionally experienced a dusting of snow in the winter and the vegetation was supported by adequate although not excessive rainfall. There were plenty of hikes and mountain biking seemed to be a popular local sport (after all, you can only basket weave for so many hours of the day). The town was a decent size with plenty of cafés and bakeries and other necessary shops.

Unfortunately, for me, the timing is wrong. With four children still in school and a husband who is a partner in a business, packing up and moving my brood halfway across the world to go through the insanity of renovating a ruin in a foreign country just isn’t feasible. Plus, I know my husband. Although he’s happy here in Canada, he grew up in London and living on a small island, even in the Mediterranean would drive him insane. So, I await another opportunity. But if, ten years from now, you turn on your telly and see me trying to communicate with a local builder or architect with a pile of stones behind me and a set of dream plans in my hand, don’t be too surprised.

Until next time…happy reading!