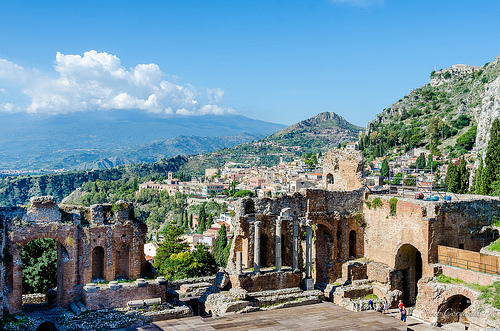 And we’re back to my usual format, talking about settings I’ve researched or sights I would like to visit. I’m already envisaging my next trip and the places I’d go. Seriously, I wish someone would pay me to travel. Until then I shall have to content myself with vicarious voyages and blog posts. Also, a note for my regular followers that I’ve changed my blog dates to the 1st and 3rd Tuesdays of the month (or thereabouts depending on life’s whims). The 1st and 15th were getting too difficult as they often fell on days when I was completely swamped with mom duties.

Enough housekeeping… Today, we head to Sicily. I did a lot of research on this Mediterranean island for my recent release, Under the Sicilian Sky. I watched videos, scoured guide books and websites, spent hours wandering around towns and villages on Google maps. I read blogs and scrolled through reviews and holiday photos posted online… I did everything but go there. But man, I wish I could.

Just the name Sicily conjures images in the mind—Mount Etna spewing lava, tiny villages perched on cliff faces, and ancient ruins from almost every civilization to claim this island at one point or another in its history. To be honest, I’m not sure where I’d start in this diverse place. I love how one website puts it: “Come visit our sunny island. We’ve been expecting you for three thousand years!” (http://www.bestofsicily.com/)

Of course I’d have to visit Agrigento and Sciacca, both mentioned in my book. Agrigento is known for the Valley of the Temples, a large archeological site just outside the town, surrounded by olive groves and almond orchards. One of Sicily’s two completely standing Greek temples is located here. Sciacca has the beaches and thermal pools to relax in after a hectic day’s sightseeing. On the way up to Palermo, a stop at Erice sounds like a good idea. This town set on a hilltop has seen successive empires pass along its medieval streets and I hear it’s known for its pastries.

Cefalù, an hour out of Palermo heading east over the “top” of Sicily is an example of Sicily’s multicultural influences. Taormina appears to be Sicily’s touristic hub with most cruises I’ve seen stopping here. With Mount Etna in the backdrop, restaurants, shops, beaches, and castles to explore, it seems to have everything, including crowds during high season. Still, I think I could manage a night in a restored medieval monastery and dinner in a Baroque palazzo no matter how many people were around me.

My trip would probably end in Siracusa, the “intellectual’s" Taormina (although I’m not sure I qualify), once one of the most important cities in the ancient Greek world. But then I haven’t lingered in wine country or stopped in Segesta to see one of the best-preserved ancient Doric temples. I guess there’s no help for it. I will have to write another book set in Sicily and work some of these wonders into my story.

Until next time…happy reading!