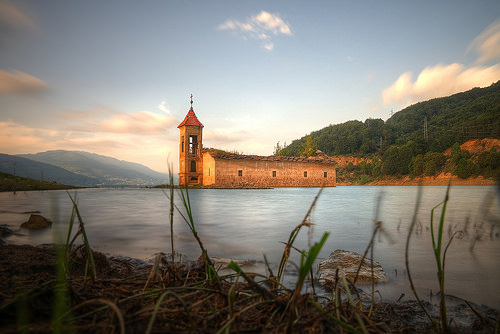 North of Greece and east of Albania is the small land-locked country of Macedonia, another former part of Yugoslavia. I know next to nothing about this country so let’s discover it together. At first I thought Macedonia was the original homeland of Alexander the Great but upon further research discovered that he was from an area of Greece with the same name. In fact, Greece has strongly objected to Macedonia taking that name and has blocked the newly formed country’s entry into several global organizations due to its concerns.

The country now calling itself Macedonia is in fact the approximate territory of the ancient kingdom of Paeonia. Philip, Alexander the Great’s father, conquered part of the land and Alexander the remainder during his reign, incorporating it into their kingdom of Macedon, so I guess that’s where they lay claim to the name. Throughout history, the country appears to have been overrun by the superpower of the day—Romans, Normans, Byzantines, Slavs, Ottomans, Serbians, Bulgarians—each have left their mark on this territory. With such a diverse history, there must be lots to see and do so let’s check it out.

Golem Grad is the number one place to visit in Macedonia. It’s an island in Lake Prespa, best reached by boat from the village of Konjsko. There are dozens of ruins to explore, ranging from a 4th century Roman cistern to a 5th century basilica and a 14th century church. I was all ready to book my travel until I read that it is also called Snake Island and while the majority of snakes are “harmless”’ water snakes, there are some poisonous land snakes as well to watch for. So, maybe I’ll pass for this time.

There are also a couple of ancient monasteries to visit and an extensive Roman ruin to explore. But if my time were limited I’d probably chose to spend it in Ohrid. This small city, set on a lake of the same name, is a UNESCO world heritage site. You can stroll along the lake on a boardwalk to beaches, bars and restaurants. The translucent cool water and cliff-backed setting lead to the Church of Sveti Jovan with magnificent views over the lake and mountains in the distance. Also on Lake Ohrid is Vevčani, a 9th century mountain side village with narrow old-brick streets, natural springs, and traditional restaurants.

Speaking of mountains, Macedonia has them and the walking trails are reputed to be wonderful and quiet. The whole country is evidently “under-explored” although in general this means you may need to be inventive if you want to see or do something specific.

Finally, a stay in Skopje (the capital) seems in order, including a few hours (or maybe more) in the nearby Ĉaršija, an old Turkish town that hosts Skopje’s best historic structures including a stone bridge. The area’s winding lanes are full of tea houses, mosques, small shops and evidently good nightlife.

Although it sounds interesting, I’m not sure Macedonia will make next year’s European adventure itinerary. But I would love to visit someday. Have you been? See you back here on the 15th. Until then, happy trials and happy reading.