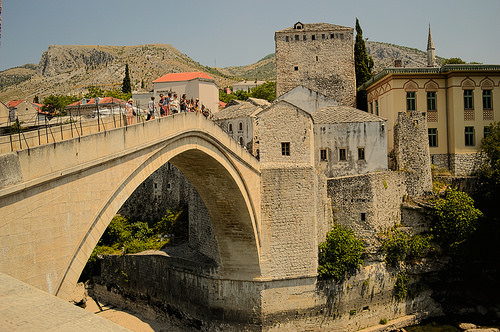 Yup, you guessed it, we are sticking with the Balkan countries and visiting Bosnia-Hercegovina today. I moved to Europe right when the Bosnian war started, so my initial thoughts on this country are tarnished by the brutality and war crimes that occurred during this horrific episode of the country’s history. For today, though, we are going to set that aside and concentrate on what there is to do and see in this all but for 20km land-locked country.

The capital, Sarajevo, is sometimes called the “Jerusalem of Europe” for its rich history of religious and cultural variety.  The city has an interesting history: it was an Ottoman stronghold in the 15th century; the location of the assassination of the Archduke of Austria that sparked the Second World War; host city for the 1984 Winter Olympics; and has the unenviable designation as the city to undergo the longest siege during modern warfare (1,425 days during the Bosnian war). Much of the city has been restored, the bullet holes plastered over, and seems worth a visit. The old town has both an evocative Ottoman quarter with little streets filled with craft workshops and cafes and a trendy Austria-Hungarian quarter built during the late 19th century.

From the websites I’ve checked, Stari Most in Mostar is the country’s chief attraction. This bridge was built in 1566 on the order of Suleiman the Magnificent (I tell you, they just don’t name leaders like they used to). However, the original bridge was destroyed in 1993 during the war but has meticulously been reconstructed using original techniques and is now a UNESCO World Heritage Site.

Bosnia-Hercegovina also offer some of Europe’s best river rafting and cheap skiing, although I can say from experience that cheap is not always a good idea when it comes to ski holidays.  However, in 2012 National Geographic named Bosnia as the best mountain biking adventure destination.

Many tours and adventures seem to focus on the recent war, as I guess is to be expected. And lots of the historic buildings and sites were damaged or destroyed. Some have been rebuilt (like the Stari Most) but others remain in ruins. From what I’ve been able to find, tourism is just getting a foothold in the country, although it is expected to have the third highest tourism growth rate in the world between 1995 and 2020. This statistic made me smile because I imagine that as the war only ended in late 1995, there wasn’t a lot of tourism happening that year. So any growth would be remarkable.

However, if you don’t like crowds and want to be the first to “discover” hidden treasures, Bosnia and Hercegovina may be the destination you’re looking for. Just be careful and consult with the locals, because a couple sites I researched mentioned that not all the landmines have been cleared from the country.

Unfortunately, I don’t think it will make my 2017 European Adventure itinerary. But if you do go, or have been, please comment and tell me what I’m missing. Until next time, happy trails.