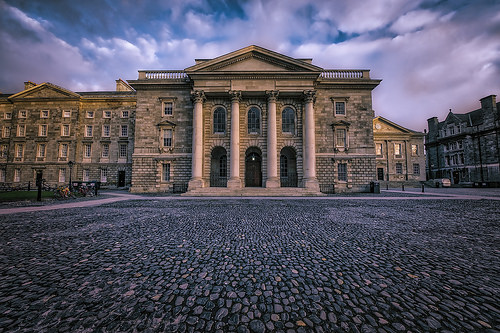 Ireland is the land of my heart. I often tell my husband he would be perfect if only he were Irish. I’ve probably put off blogging about Ireland waiting for the time when I’d visited personally. And trust me I will get there one day, but said nearly-perfect husband undoubtedly worries that if I went he’d never be able to get me to leave.

I recently read a book set in Dublin (Flying by the Seat of My Knickers by Eliza Watson) and watched Leap Year last night with my children. So I’m in a Dublin state of mind. As a little history lesson, Dublin started as a Viking settlement (must be why I feel such an affinity to Ireland as I’m part Viking) then became the principal city of Ireland following the Norman invasion. So, here’s my travel itinerary should I ever get to visit that fair city.

First, of course, I’d have to go to a pub. I will admit I’m not a Guiness fan but I’d try one in Dublin. Or maybe a whiskey. I love whiskey. To walk it off I’d visit Chester Beatty Library in the grounds of Dublin Castle. Spread over two floors it houses more than 20,000 manuscripts, rare books, miniature paintings, clay tablets, costumes and other objects of artistic, historical and aesthetic importance. Even better, there’s a Silk Road Café on the ground floor where you can get Middle Eastern cuisine. I think it may be hard to get me to leave.

When I finally dragged myself from the library, I’d head over to the National Museum of Ireland, home to the country’s most important archeological treasures. I may be here a while. And what better place to round off a day of cultural enrichment than to visit one last museum—the Irish Whiskey Museum.  I knew I’d love Dublin.

Of course all this history and liquid refreshments would call for a little down time, and a great place to chill would be St. Stephen’s Green, a beautiful park. The perfect place to enjoy nature with a spot of people watching. Top marks for it as it’s a park with history as well. Finally, before leaving Dublin, I’d wander the cobbled streets pop in and out of the shops and pubs and just enjoy a city known for its hospitality.

There are several day trips to scenic locations from Dublin, including Glendalough—one of the most impressive monastic sites in Ireland. Set by two lakes, in a glen, the remains include a 30m-tall, 10th-century round tower, a 12th-century, several smaller churches and an “atmospheric” graveyard.  Another daytrip would be to Powerscourt Estate an 18th century house and gardens.

Like your history on the prehistoric side? Then head 40 km northwest of Dublin to Brú na Bóinne (the Boyne Palace) which is 1,000 years older than Stonehenge and predates the pyramids of Egypt by six centuries. An interpretive center, the design of which reflects that of the tombs, houses exhibits from the pre-Celtic history of Ireland. There are a couple other daytrips but these are the ones I’d do first, if I ever made it out of the library or whiskey museum.

While I’m off to book my flights to Ireland, let me know if you’ve visited and what you’d recommend. See you back here mid-May.