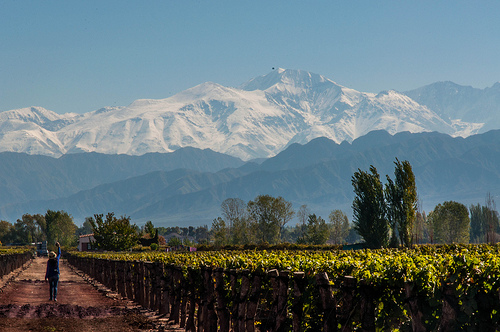 I’ve been spending a lot of time recently, at least mentally, in the Mendoza area of Argentina. I’m working on the edits for my third book in the Vintage Love series, The Tycoon and The Teacher. But even if I hadn’t set a story here, it would still be on my radar as a place I’d love to visit. There’s something about a place known for producing quality wine that draws me. I guess it doesn’t take a genius to work out what that is—a moderate climate.

Mendoza has not only wine but mountains as well. From the photos I’ve seen, the vineyards seem to kiss the feet of the Andes. In fact, one vineyard is at an elevation of 5,000 feet above sea level. Visiting the wineries would be top of my list of to-do things if visiting Mendoza. But there are plenty of other non-alcoholic activities to enjoy while recovering. Hiking in the Andes is very popular, and if you’re into mountaineering, Mount Aconcagua is the highest mountain outside of Asia, thus the highest peak in both the Western and Southern hemispheres. It’s supposed to be an “easy” climb, in other words, your chances of dying are slightly lower than on other mountains. But altitude sickness and complications from the cold are serious risk factors.

Aside from drinking and climbing, Mendoza region offers a host of indoor and outdoor activities. On the indoor side, you can visit the aquarium, which seems slightly odd for such a land-locked area. There’s also several museums, one of which, Museo Fundacional is built over the foundations of an ancient civilization. Most of Mendoza city was devastated by several earthquakes in the past so few truly old buildings remain.

Outdoors there are lots of parks, cycling tours, horseback riding, river rafting, hikes, cave exploration, skiing, etc. to enjoy. Some of the spas I researched look amazing. I’d definitely try to work a stay at one of those into my itinerary. After all, I’d probably need to detox at some point.

As mentioned above, because the region has been rocked by earthquakes in the past. Mendoza city was rebuilt with large squares and wider roads and sidewalks than elsewhere in Argentina, giving it a relaxed, less frantic feel. Evidently the city comes alive at night when the restaurants and patios fill up and the local population stroll around to see and be seen. However, as the area is in essence a desert, canals flank many of the streets to bring water into the city and parks. Don’t fall in.

Mendoza is considered a fairly safe destination, but as with anywhere keep alert and watch where you’re going and where you put your stuff. Ask at your hotel or other accommodation for places to avoid.

Alas, for the next few years anyway, I will have to be content with my virtual travels. But if you’ve been let me know in the comments what you found interesting about this region.

Until next time (and apologies for the late posting of this blog, I was away in Vegas at a romance writers/readers convention).