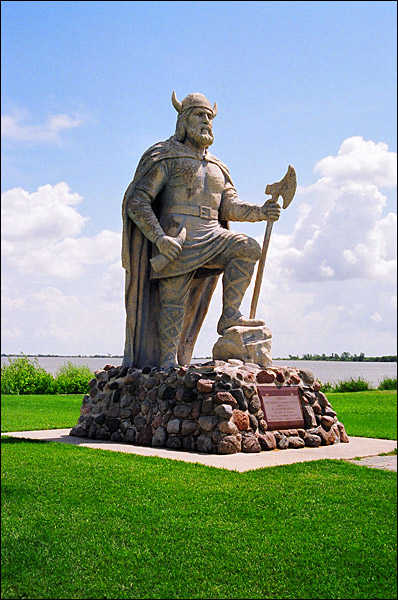 Yes, today I’m talking about Gimli, Manitoba, the place you’ve likely never heard of, or if you have, only in connection with an airplane that ran out of fuel mid-flight and had to land on the drag strip in this small town in the middle of nowhere. For me, however, Gimli was home for eight years and I did the majority of my schooling here. And I can honestly say that living in Gimli is half the reason why I’m a writer today.

But let’s go back to the beginning—where the hell is Gimli, Manitoba? When I was a young child, they sold t-shirts with this slogan. Except I didn’t notice the question mark and thought it was a statement. Accurate, I thought, but not the best publicity. The town is actually about 100 km (60 miles) north of Winnipeg, on the shores of Lake Winnipeg. Drinkers of Seagram’s Crown Royal will know it as the location where this whiskey is made. In fact, my father worked for the Seagram plant and that’s why we ended up in Gimli.

Gimli, as evidenced by its name, was originally settled by people with Icelandic heritage and became a popular destination for Icelandic immigrants to Canada between 1870 and 1915. It still hosts Islendingadagurinn or Icelandic Festival Days on the August long weekend where you can sample Icelandic foods, listen to Icelandic stories and poetry, and generally enjoy a small town in festival mode. I took Icelandic class at night school and even sat an exam at The University of Manitoba, one of the few places in the world I imagine where you can study Icelandic outside of Iceland.

Winters in Gimli are brutal. Even the first Icelanders to settle in the area found them hard. The winds are bitter and once I even had to deliver the newspaper wearing a snowmobile helmet because it was so cold my eyes would have frozen without some protection. If you’re much hardier than I am, you can snowmobile, cross-country ski, or go ice-fishing on the lake which freezes over completely in the winter, despite being the eleventh largest freshwater lake in the world. I told you it was cold. When I was in high school, as a fundraiser, they used to put an old car in the harbour and then take bets on when it would fall through the ice. I don’t know what you won if you guessed correctly, aside from knowing that spring had finally arrived. The only thing I did in Gimli during the winter was read. I’m sure I read almost every fiction book in the public library. Thus my love of reading and hence writing was born. For that, I thank you, Gimli.

Aside from reading, the other great thing about Gimli was sailing in the summer. My dad had a little boat and my friend had a bigger one. So I spent most of my summers on the water, finally putting those Manitoba winds to good use. You always had to keep one eye on the sky, though, because summer storms were as violent as the winter was harsh and they came up suddenly. Thankfully, they are also short lived so sheltering for half an hour was usually all that was required.

If you are interested in more about Manitoba, my book Her Faux Fiancé is set in the fictional town of Akureyri, Manitoba, although Gimli does play a starring role. And if you do happen to be in Manitoba, and the weather is fine, make the trip north. Tell them Alexia sent you. They’ll have no idea who that is, still…

Until the next blog post, I wish you happy travels.