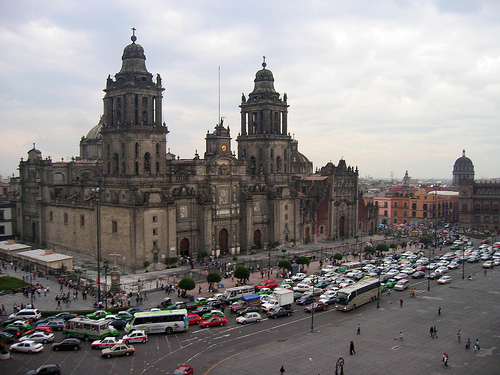 Formula 1 returned to Mexico after twenty-three years away and the race did not disappoint. There seemed to be great enthusiasm from the fans as well, so hopefully it will become a permanent fixture on the F1 calendar. I haven’t been to Mexico although I know plenty of people who have. My husband has been turned off by all the reported murders, robberies and gang violence so refuses to go. Maybe I’ll just have to leave him at home.

Anyway, if I did go to Mexico, I’d want to, as much as possible, see the real Mexico, not just hang around in a resort and eat the Canadian version of Mexican food. Of course I’d want to explore the Mayan ruins and visit as many of the historical and archeological sites as possible. I saw on a website that one of these is a seven hour trip from Mexico City so that would be my first destination.

For this post, however, rather than focus on the tourist attractions, I’m going to comment on some of the “Strange Things About Mexican People.” I found this on the MexicoCity.com website but can’t personally testify as to its authenticity (by the way, I love how the list goes 1, 3, 2, 4, 5). Feel free to share your views (kindly) on my comments section. The first “strange” thing it claims is that Mexican people stare at others longer than is considered polite in other cultures. I’m okay with that, means I get to look back as well, although I probably would be checking in a mirror to make sure my top isn’t on backwards or completely see-through.

Evidently quite passionate public displays of affection are acceptable, so if you’re on honeymoon (or still madly in love with your partner) then use all that precious time wasted while waiting in line or on the bus to show them just how much you care. If you’re a little shy about your affections, you may want to bear in mind point one, people will stare. The third “strange” thing is that Mexicans allegedly love their hair gel. Consider it one less thing to pack as it should be readily available there. Boys use copious amounts to keep their hair in place and girls use it to cement errant strands from flapping out of their ponytails. You may also want to keep this in mind if your PDA’s in public involve a local and you like to run your fingers through the other person’s hair – bring something to wipe your hands on afterwards.

Point four involves lateness, allegedly Mexicans only show up for football (soccer) matches and bullfights on time. So if punctuality is your thing, you may want to bring along someone to suck face with while you’re waiting for your Mexican friend. Oh, and sorry, Mexico but you haven’t got the market cornered on this one, loads of nationalities have a very flexible view of time. Lastly, the traffic in Mexico (not sure if this just applies to Mexico City or all the large metropolises in the country) is insane with drivers disregarding traffic lights and honking their horns continually.  I’ve been to Italy, Egypt and the Philippines, I don’t think you can convince me it is worse than that. One trick I’ve learned from those places, if you’re a pedestrian and trying to cross the street, do so with a local.

Well, if those are the five strangest quicks about Mexico, it sounds like a great place to visit. Next blog post we’ll head to Rio de Janeiro, home to the penultimate race of the 2015 F1 season. See you on January 1st.