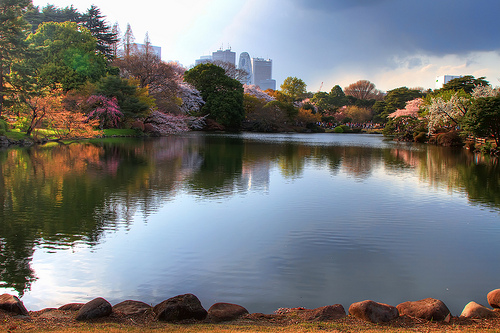 Due to the temporary suspension of my blog, we’re only up to the Japanese Grand Prix on our spotlight of Formula 1 races around the world. And I realize that Tokyo is not the closest city to Suzuka where the race is held, but as the capital and largest city in Japan we’ll concentrate our visit here.

I’ve never been to Tokyo, or Japan. In all honesty, I’ve never really wanted to go. Having said that, if someone offered me a free ticket and accommodation, I’d be off in a heartbeat. So, imagining that someone has given me said free trip, let’s check out the top rated things to do in Tokyo. Ready?

First choice, according to Trip Advisor, is the Shinjuku Gyoen National Gardens (see photo). From what I’ve read it sounds like New York’s Central Park or London’s Hyde Park, a place to escape the noise and chaos of a big city. There seems to be a small fee to enter or you can pay an astronomical sum for a tour. Second on Trip Advisor’s list is a place called Meiji Jingu which appears to be a Shinto Shrine surrounded by gardens. Sounds also like a great place to people-watch and possibly experience some traditional Japanese culture.

Okay, third on the list is a cooking class. If you know anything about me, you know I dislike cooking (even though I’m quite good at it), so, that wouldn’t be on my holiday to-do list.  Fourth is Asakusa, a traditional neighbourhood with old fashioned shops. According to the comments, it’s quite busy and touristy. Maybe visit it first then escape to one of the parks mentioned above. The fifth most popular tourist attraction is Senso-ji Temple which is in the Asakusa neighbourhood. It has a five-story pagoda and other interesting photo opportunities but allegedly is very busy. Visiting at night when the lanterns illuminate the area may be the best option.

Another item on the list is the Tokyo Metro. However I’ve spent too many hours squished on the London Underground to ever find public transit a holiday attraction, unless I’m in Moscow where the stations are definitely worth a visit. There are, of course, impressive buildings, museums, other parks, and I’m sure some truly awesome technologies we can only dream about here in North America. Maybe I will put Tokyo on my bucket list.

Have you been to Tokyo or Japan? What was your favourite thing to do or attraction to visit?

Next blog post we’ll head to Sochi, Russia home of the 22nd Olympic Games and the next stop on the F1 calendar. Meet you back here on the 15th.