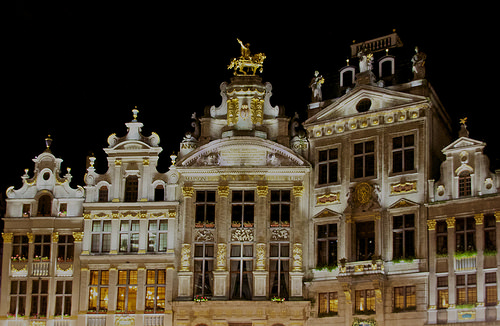 Last blog post we were happily avoiding the world in Clearwater, BC waiting for our flight to Brussels. But then life intervened and an update by my previous blogging program left my site vulnerable so I had to shut down my blog for several weeks. I took the opportunity, however to completely revamp my website, so after reading this post, feel free to look around.

As a quick recap, we’re following the Formula 1 races around the globe. After their summer break, the first race was at Spa Francorchamps, which is my favorite race on the F1 calendar. As it was a few weeks ago, I can’t actually remember the race, except that it wasn’t as incident prone as Spa usually is - must have been one of the few all-dry races Belgium has seen in a long time.

But as were supposed to be on a tour, we’ll leave the race as history. I’ve been to Belgium several times and was quite surprised to find I hadn’t blogged about it previously. It’s easy to get from London to Brussels on the Eurostar and as my husband isn’t a huge fan of Paris, it was a quick weekend away for us. I can honestly say Brussels is amazing and should be on every European tour itinerary.

Brussels has the ‘je ne sais quoi’ of Paris without the attitude. It has history, palaces, an amazing square and giant balls. Yes, giant balls. Okay, it’s called the Atomium and was originally built for the 1958 World’s Fair but has survived by popular demand. However, the absolute best thing to do in Brussels is to grab a coffee and one of the heavenly smelling gaufres (Belgian waffles), sit in the main square and watch the people. Belgians out for the day are one of the most elegant people I’ve come across. You may want to rethink your wardrobe and dress a bit better when in Belgium. Plus on the weekend, at least when we were there, there was an amazing market in the square which was well worth a wander.

The ideal time to visit Brussels is actually on the weekend. During the week the city is full of European politicians and international dignitaries. The hotels are full, the streets are blocked with limos and security details and regular Belgians are busy at work. Come on the weekend, many of the hotels offer amazing packages and the city becomes alive with real people. We stayed at the Stanhope, up near the palace and an easy walk to the main square. It is a fabulous boutique hotel and at the time had a policy of upgrading to the best room available, no matter what you’d paid for. So my husband and I had an amazing suite with a library downstairs and a spiral staircase up to the bedroom. It was fabulous and a weekend we’ll never forget. Belgian food is also great, French with a twist. And don’t get me started on the chocolate.

Another post I’ll talk about Bruges also in Belgium. For now, however we’ll keep on the F1 schedule. The race following Spa was in Monza, Italy. I’ve blogged quite a bit about Italy – Rome, Pisa, Venice, Florence, and a bit about Brisighella so I think we’ll leave that country. Following Italy was Singapore but I’ve also blogged about that city state. That brings us to Japan and the race at Suzuka. I haven’t been to Japan but we’ll make a brief stop there. See you back here on November 1st. Merci beaucoup for visiting Brussels with me today. Have you been? What’s on your recommended ‘must do’ list?